In 1898, a group of twenty-five women organized a Political Science Club for the purpose of cultural development and community enrichment. A lawn party, at the home of one of the members, was soon held to start planning a library for the small Village of North Greenfield. The meeting resulted in the donation of 200 books, a considerable amount of cash, and arrangements to have a traveling library sent from Madison. The women's Political Science Club evolved into the West Allis Woman's Club and the small Village of North Greenfield is now the City of West Allis.

The library's first location was shared space in a delicatessen store that housed the village's post office as well as the library. The postmistress, Miss Elizabeth McCullough, was part owner of the store and also served as the first librarian. On January 4, 1899, the first "library card" was issued for use in that library, which one day would house over 250,000 items and circulate more than 750,000 items each year. Today almost 34,000 West Allis residents have library cards.

From 1899 to 1907, this well-run "project" was under the direction of the Woman's Club. The library collection consisted of a set of traveling books plus gifts and donations from club members. The Wisconsin Free Traveling Library was a collection of books that would stay in one locale for six months before being sent on to the next. During this time, rent, fees for the traveling library, and the librarian's salary were all paid by the Woman's Club.

By 1907, the library had outgrown its quarters and the public's demand for books was beyond its supply. The Club voted to turn its library project over to the City of West Allis. The transfer was completed on July 28, 1907, and the West Allis Library was officially open. 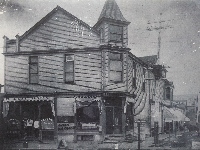 The location is present day 81st and National. But in 1898 it was the site of the Woman's Club Library.