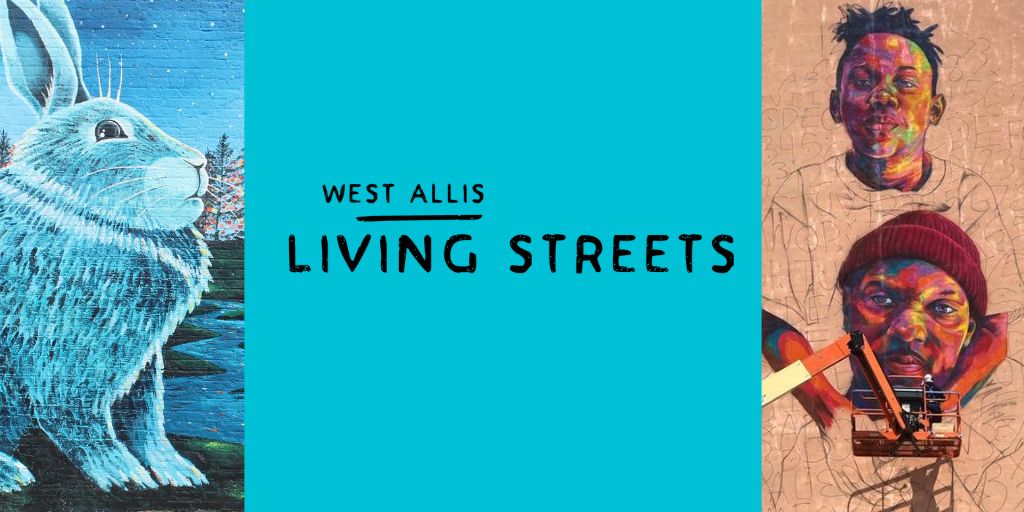 New projects are supported by the West Allis ArtScape Program. Each year, this program provides grants to support the addition of unique public art to our community. This grant program is not funded by tax dollars; funding is provided by First-Ring Industrial Redevelopment Enterprises (FIRE), a regional community development entity, run through the City of West Allis’ Economic Development Department.

The online application for the ArtScape Grant Program can be found here.

Will Bryant is an artist, designer, and illustrator based in Austin, TX who likes to think of his art as fun, exuberant, and sometimes humorous. An avid road and gravel cyclist, Will's interests aligned perfectly with West Allis' Samantha and Skylar Schneider, professional cyclists and owners of our city's newest bakery. The abstract floral pattern is inspired by native purple coneflower and blue aster which can be found outside the iconic Wes Allis Farmer's Market. The mural's centerpiece is a racing-style bicycle with an homage to the bread and coffee served at the Bread Pedalers store.

Fred Kaems is a multi-disciplinary artist from Milwaukee. His murals are influenced by his background as a graffiti artist in his youth. This influence shows with bold colors, hand cut stencils, and the forgotten spaces of man that nature has begun to retake. This mural will expand on Crawdaddy's mural depicting famous musicians and New Orleans culture, bringing life to a formerly blank wall along Greenfield Ave.

3 new murals came to the Burnham Pointe area in the Fall of 2021 as part of West Allis Living Streets.

Erin LaBonte is a Wisconsin-based artist that is dedicated to inspiring and educating young artists in their personal explorations. She served as associate professor of art at Silver Lake College in Manitowoc, WI for nine years, is currently associate lecturer at the University of Wisconsin Green Bay and is co-founder of Yonder, an art space in Algoma, WI. Erin practices many artistic mediums in her own studio work and is an advocate for bringing art to public spaces and for community engagement.

Drew York is a Milwaukee muralist and painter. A retired professional BMX rider, York developed a passion for art through his travels around the globe meeting area artists and exploring major cities. York’s murals can be seen in various spots throughout the City of Milwaukee, including Mobcraft Brewery, Bridge Battle Alley, and Four Seasons Skate Park. Well known for his signature “Pirate Rabbit,” York derives much of his inspiration from his love of street art, nature and animals. He believes great art should be accessible to everyone, both in its location and price.

Born in Chicago, John Kowalczyk currently lives and works in Milwaukee utilizing art as a vehicle towards a more equitable society. Since 2017, Kowalczyk has served as the Program Director with the non-profit organization Artists Working in Education where he oversees large scale community art projects working with artists, community stakeholders, and youth in Milwaukee. Kowalczyk’s work has been exhibited at the Sienna Art Institute in Italy, The Charles Allis Art Museum, The Museum of Wisconsin Art, Cedarburg Cultural Center, John Michael Kohler Art Center, and D.Varelli Gallery in Chicago along with other galleries across the U.S.

“We have wanted to do this in West Allis for years, and we could not be happier to begin this work in 2020,” said Mayor Dan Devine, a longtime supporter of strengthening arts and cultural opportunities in West Allis. ”This project has been fantastic for our City.”

4 new artworks were installed at various sites around the commercial corridor of West Allis, sponsored by the City’s Artscape Committee.

Thomas Evans, aka “Detour,” was invited to paint the five-story expanse of the Lamplight building. Detour, from Denver, CO, is an all-around creative specializing in large scale public art, interactive visuals, portraiture, immersive spaces, and creative directing. His focus is to create work where art and innovation meet. A born collaborator and “military brat,” Detour pulls from every conceivable experience that shapes his landscapes and perspectives.

The mural was inspired by a photograph of one of Detour’s friends, John Chapman, and Chapman's son, Britton. Detour hopes people will relate to the piece through their own happy memories with loved ones.

West Allis resident Dan Herro was chosen to paint “The Night Hare,” a beautiful scene featuring a white rabbit and rich night sky. Inspired by the natural world, Herro creates scenes that bring a sense of wonder, a place to slow down and to rest. As Herro explained, “While resting in the glow of the moon, the rabbit observes a silhouette resembling himself in the volcanic plains of the moon's surface. This discovery brings about a realization that in some way, everything and everyone is connected.”

Elmhurst, IL - based artist Jason Watts painted a State Fair-inspired mural: "Wonder Wheel." His mural is intended to draw viewers to the kids running towards a Ferris wheel. This is part of a broader theme the artist explores, children at play. Watts noted, “Oblivious to any problems in the world, in current times, this aspect of normalcy is especially prescient. The kids come from all different backgrounds and are running together to a distant destination of fun.”

Milwaukee based artist David Mueller brought fun and whimsy to the Towne center with a quirky alligator mural, titled "Dile B for Birder." Mueller’s work has been exhibited locally and internationally in a variety of galleries, venues, and publications, and the artist self-describes as “a working-class kind of artist.” Mueller hopes viewers can look at the mural and understand that at times something ominous and scary has the potential to be welcoming and accessible. Mueller added, “The characters and situations we encounter in life may at first appear intimidating and unlikely, but they could end up being something attainable and symbiotic if we dropped some of our preconceptions.”

Visit the WALS murals and other City of West Allis Artscape Committee projects, and share your experiences on social media, #WestAllisLivingStreets.